If you’re worried about you child’s behavior in school, a new study suggests you might want to make sure your kids are getting enough sleep. The results of the new study by the journal of Pediatrics may not surprise many parents of young children, but the findings show that kids who sleep more behave better. They also seem to cope better with the frustrations and trials of school and other environments better than children who are sleep deprived.

The Canadian study done by Reut Gruber of the Attention Behavior and Sleep Lab at the Douglas Research Center in Quebec, Canada and his colleagues, recruited the parents of 34 elementary school students ages 7 to 11 years old. The researchers wanted to look at whether more sleep leads to better behavior. Though the answer may seem obvious to parents, few scientific studies have actually looked at the link.

During the first week of the study the researchers monitored the kids sleeping habits and established baseline data on them. The students slept an average of about 9.3 hours a night. During the second week of the study the researchers split the children into two groups. The first group added an average of 27 minutes of sleep a night to their evening routine, while the second group stayed up an average of 54 minutes later. It may not seem like much, but even this small differential in sleep had pronounced results.

Researcher had the student’s teachers, who were unaware of which group the students were in, rate the student’s behavior and emotions before and after the sleep study. They reported that the students who got less shut eye were more likely to have behavior problems, cry, and generally be less able to cope with the day to day stresses of school. The students who got more sleep each night actually showed improved behavior in school according to their teachers.

The results of this experiment show that kids who sleep more behave better, but what should you do to ensure that your child gets the optimal amount of sleep? Well, the National Institutes of Health suggests that kids get 10-11 hours of sleep a night, but every child is different.  If your child is falling asleep during the day, it may be a sign that they aren’t getting enough sleep at night. Make sure your kids have a consistent bed time, even on the weekends and be good role models by going to bed on time yourselves. Sleep is just as important to your child’s health as nutrition and exercise, so keep your children healthy and happy by giving them enough sleep. 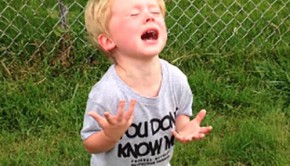 This Little Kid Goes Ballistic After Stepping In Dog Poo →

Divorce In What Maisie Knew – What Does Divorce Mean For Kids? →