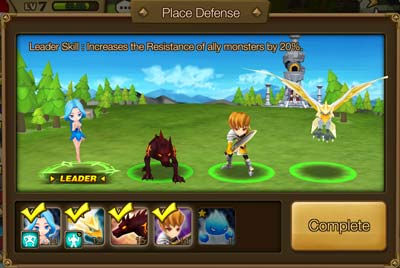 Summoners War: Sky Arena is the new role playing game from Com2uS, a Korean developer. The game is available for download on all Android and iOS devices, including iPhone, iPad, and iPot Touch. Throughout the game you will take on the role of a monster summoner. You and your team of monsters will take on a variety of monsters in battle. The goal is to defeat the enemies and collect the powerful Mana Crystals.

Compared to other role playing games on the app stores, this Summoners War: Sky Arena will blow you away! The graphics, design, concept, etc, are nothing like you may have seen before. When you enter battles, you will be playing against other members in the community or fighting battles to help protect the floating world. Whether it is fighting a battle in the Sky Arena or on Mt. Siz, your monsters will be put to the test.
As you progress through the game, you will be able to increase your monsters ability through power ups, energy, and runes. The more powerful your monsters are, the greater chance you will to have to defeat your enemies. Not to mention that you will have your own floating island that will act as your defense and home base.

Summoners War: Sky Arena also gives you the option to join online guilds. Online guilds allow you to make new friends and unlock more monsters. In the game you will notice that there is no wrong way to play the game. With a little time and luck, you can have some of the top monsters in the game! If you are having trouble figuring out different strategies or need a few questions answered, check out this Summoners War: Sky Arena guide!