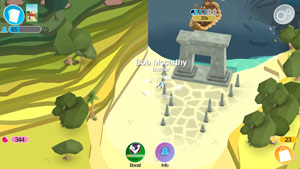 Godus has finally arrived. Nearly a year after Peter Molyneux released his crowdfunded god game for PC, iOS gamers got the chance to download the mobile version for free last week. Players fill the role of an omnipotent deity with powerful world-shaping abilities. The game revolves around gathering followers, expanding into new territory, and discovering new technologies and godly powers–nothing new for Molyneux and his development studio, 22Cans. Molyneux pioneered the god game genre in 1989 with the hit Populous, which introduced the concepts on which Godus is founded. Like Godus, Populous made players into gods who were able to shape the earth itself and whose powers grew with their number of followers. It proved to be such a successful spin on the artificial life genre that two Populous sequels would be produced, and Molyneux would go on to hone his new genre in the Black & White series. These two games introduced morality into the formula. Players could choose to be a kind and benevolent god, or to be one that was feared by its followers. The games also introduced a “creature” that the player controlled, whose form shifted (along with the cursor) to correspond with the player’s good or evil acts.

Years later, Molyneux has returned to the genre he spawned. In the intervening time, he formed the studio 22Cans with the intent of making “a team of the 22 most talented, passionate and creative individuals with which to make the defining games of his career.” 22Cans (now 30 strong) first collaborated on the experimental social game Curiosity–What’s Inside the Cube? Now they’ve released their first traditional Molyneux god game in Godus.

Godus is far from perfect. Its touch controls are fiddly, and features are constantly changing as 22Cans updates the game. But Godus is very much a spiritual successor to Populous, the game that made Molyneux famous so long ago. Although Godus has yet to gain much traction in mainstream gaming culture, that may soon change now that the mobile version is here at last. For more information on Godus, check out the Godus Wiki.