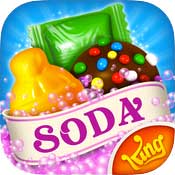 Why Farm Hero Saga Is The Next Candy Crush

Unless you’ve been living under a rock for the last year then you’ve surely heard of Candy Crush Saga. Actually,